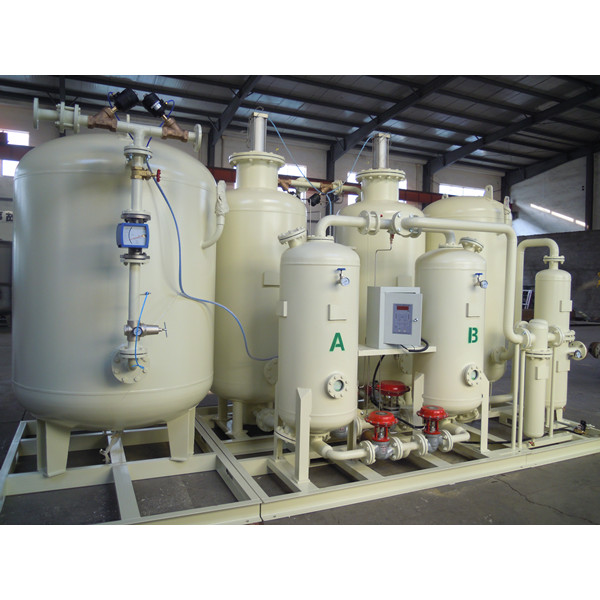 
Send email to us

We are going to dedicate ourselves to providing our esteemed buyers together with the most enthusiastically thoughtful products and services for Oxygen Generator Astroneer , Cost For Oxygen Plant , Building An Oxygen Concentrator , Our products are strictly inspected before exporting , So we gain a good reputation all over the world. We looking forward to cooperation with you in the future. Factory For Hidgeem Oxygen Concentrator - Vpsa Oxygen Gas Generator for Industrial Area – Sihope Detail:

Working principle of VPSA pressure swing adsorption oxygen generator
1. The main components in the air are nitrogen and oxygen. Under ambient temperature, the adsorption performance of nitrogen and oxygen in the air on the zeolite molecular sieve (ZMS) is different (oxygen can pass through but nitrogen is adsorbed), and design an appropriate process. The nitrogen and oxygen are separated to obtain oxygen. The adsorption capacity of nitrogen on the zeolite molecular sieve is stronger than that of oxygen (the force between nitrogen and the surface ions of the molecular sieve is stronger). When the air passes through the adsorption bed with zeolite molecular sieve adsorbent under pressure, the nitrogen is adsorbed by the molecular sieve, and the oxygen is adsorbed by the molecular sieve. Less, get enriched in the gas phase and flow out of the adsorption bed to separate oxygen and nitrogen to obtain oxygen. When the molecular sieve adsorbs nitrogen to saturation, stop the air flow and reduce the pressure of the adsorption bed, the nitrogen adsorbed by the molecular sieve becomes desorbed, and the molecular sieve is regenerated and can be reused. Two or more adsorption beds alternately work in turn to continuously produce oxygen.
2. The boiling points of oxygen and nitrogen are close, the two are difficult to separate, and they are enriched in the weather together. Therefore, the pressure swing adsorption oxygen plant can usually only obtain 90-95% of oxygen (the oxygen concentration is 95.6%, and the rest is argon), also known as oxygen enrichment. Compared with the cryogenic air separation unit, the latter can produce oxygen with a concentration of more than 99.5%.
Device technology
1. The adsorption bed of the pressure swing adsorption air separation oxygen plant must include two operating steps: adsorption and desorption. In order to continuously obtain product gas, usually more than two adsorption beds are installed in the oxygen generator, and from the perspective of energy consumption and stability, some necessary auxiliary steps are additionally provided. Each adsorption bed generally undergoes steps such as adsorption, depressurization, evacuating or decompression regeneration, flushing replacement, and equalizing and increasing pressure, and the operation is repeated periodically. At the same time, each adsorption bed is in different operation steps. Under PLC control, the adsorption beds are switched regularly to coordinate the operation of several adsorption beds. In practice, the steps are staggered, so that the pressure swing adsorption device can operate smoothly and continuously obtain product gas. . For the actual separation process, other trace components in the air must also be considered. The adsorption capacity of carbon dioxide and water on common adsorbents is generally much larger than that of nitrogen and oxygen. Suitable adsorbents can be filled in the adsorbent bed (or the oxygen-generating adsorbent itself) to be adsorbed and removed.
2. The number of adsorption towers required by the oxygen production device depends on the scale of oxygen production, the performance of the adsorbent and the process design ideas. The operation stability of multiple towers is relatively better, but the equipment investment is higher. The current trend is to use high-efficiency oxygen generation adsorbents to minimize the number of adsorption towers and to adopt short operating cycles to improve the efficiency of the device and save investment as much as possible.
Technical characteristics
1. The device process is simple
2. The oxygen production scale is below 10000m3/h, the oxygen production power consumption is lower, and the investment is smaller;
3. The amount of civil engineering is small, and the installation cycle of the device is shorter than that of the cryogenic device;
4. The operation and maintenance cost of the device is low;
5. The device has a high degree of automation, is convenient and quick to start and stop, and there are few operators;
6. The device has strong operation stability and high safety;
7. The operation is simple, and the main components are selected from well-known international manufacturers;
8. Using imported oxygen molecular sieve, superior performance and long service life;
9. Strong operation flexibility (superior load line, fast conversion speed).

Related Product Guide:
As for aggressive price ranges, we believe that you will be searching far and wide for anything that can beat us. We can easily state with absolute certainty that for such high-quality at such price ranges we're the lowest around for Factory For Hidgeem Oxygen Concentrator - Vpsa Oxygen Gas Generator for Industrial Area – Sihope , The product will supply to all over the world, such as: Lyon, Germany, Poland, Our tenet is "integrity first, quality best". We have confidence in providing you with excellent service and ideal products. We sincerely hope we can establish win-win business cooperation with you in the future!
It is not easy to find such a professional and responsible provider in today's time. Hope that we can maintain long-term cooperation.

By Abigail from Islamabad - 2017.02.28 14:19 Products and services are very good, our leader is very satisfied with this procurement, it is better than we expected,